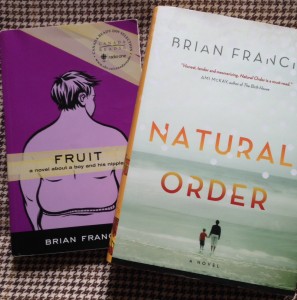 I’ve written about the wonderful endorsement I got from Andrew Holleran, but there is one other great blurb that I am fortunate to have on the cover of my book.

It’s from writer Brian Francis. Brian’s first novel, Fruit, was recommended to me many years ago by my friend Neil. It tells the story of a young boy named Peter Paddington who is overweight, gay and whose nipples talk to him. I loved the book immediately. It was funny, endearing, powerful. There was something about it that spoke directly to my own childhood experiences as an outsider.

A couple of years later I was excited to learn that Brian had another book coming out. It was called Natural Order. I read the description and a part of me froze. The book was about the relationship between a woman and her gay son.

I know I’m not the only writer who has thoughts like these: You have an idea for a novel and you work on it for years, wondering in the back of your head if someone else might be working on something similar. When Brian’s book came out in 2011, I was still slashing away at the manuscript and hadn’t found a publisher. Had he beaten me to the punch?

I picked up Brian’s book once it was available and read it cover to cover. It was a great story and thankfully much different than mine. Natural Order is a deeply moving tale, told from the point of view a mother coming to terms with the realities of her son’s life after his untimely death from AIDS. It was fresh, heartbreaking. I had never read anything like it.

I don’t know Brian, but I did feel some kind of kinship with him (the same could be said of Andrew Holleran). We are both gay writers who are curious about the complex relationships that gay men have with their mothers. I knew when it was time to look for endorsements I wanted Brian to read my book. And although he was quite busy, he generously offered to read it and I was touched with what he had to say.

You can read his blurb here.