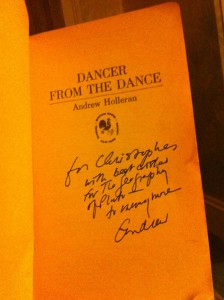 Andrew Holleran blurbed my book. I forget that sometimes—that you’ll be able to see his name and quote on both the back and cover page, my name sharing the same space as his.

It’s hard to get my head around it. Andrew Holleran is my literary hero. I’ve read (almost) everything he’s ever written. He’s masterful. He makes me want to be a better writer.

Growing up I always knew I wanted to be a writer, but I never much read anything that I liked. In high school they throw so many classics at you – A Tale of Two Cities, White Fang, One Flew Over the Cuckoo’s Nest. All great books, sure, but none that really spoke to me. None that I wished I had written.

I must have been around 25 when I picked up Holleran’s Dancer from the Dance at a used book sale. It was a fifth edition: compact, worn and yellowing. From its first pages I knew I had stumbled on to something significant. The book was pure truth. It made me understand what great writing can do.

The story takes place in New York City and centres around the love/sex lives of its two main characters: the handsome and lonesome Malone, and the witty and flamboyant Sutherland. The book was published in 1978 (when I was four years old), but reading at 25 I felt that Holleran was talking about my generation—the bars, the bitchiness, the partying, the obsession with beauty, the search for love, the settling for less. He could easily have been talking about us. The book continues to resonate today. I reread it every three years or so, and also pick it up whenever I’m stuck and need to fine-tune my own writing.

Last year I found out that Andrew Holleran would be appearing at the Saints and Sinners literary festival in New Orleans. Friends of mine were also going, so I decided to go too. At the opening party I went up to him and introduced myself. I tried not to gush, and thanked him for his work. I told him what Dancer had meant to me. He was very humble, but happy to hear. And curious to know how I had first come across it. He also wanted to know more about me. About my book. About life in Montreal. It was thrilling to be able to talk so casually with him.

On the last night of the festival (after I had been to every one of his events) I brought my dog-eared copy of his book to one of the closing parties. I asked him if he would sign it. He marvelled at the original cover, and told me a story about how the cover model had tried to sue because he didn’t know the book was about the lives of gay men. I didn’t think I could be any happier that night, walking back to my B&B under a full moon with my freshly signed copy in my hands.

When I got back to Montreal I mustered up the courage to write to him and ask if he would consider blurbing my novel. He told me he was very busy, but asked to see it. So I printed up a copy and promptly mailed it to him. Patiently I waited.

The email came in several months later when I was at my office Christmas party. I checked my iPhone for messages, and there it was. An email from him telling me how much he enjoyed the book—read it in one sitting—and was happy to give me an endorsement.

Landing a book deal felt like a great enough accomplishment. Having my literary hero read, and like, my book had me orbiting the moon.

2 Replies to “An Endorsement from Andrew Holleran”