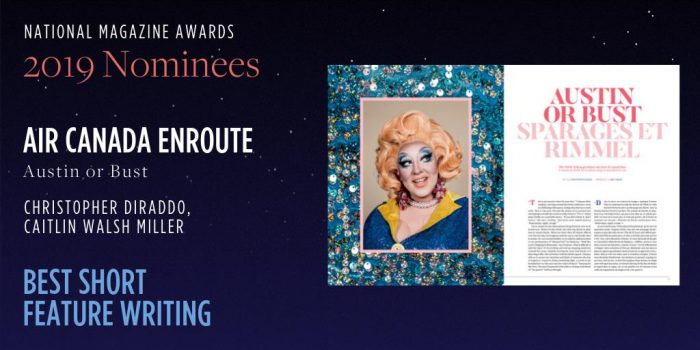 Last week, I found out that one of my articles for enRoute magazine was nominated for a National Magazine Award (I didn’t even know it had been submitted). I’m stoked.

In November 2017, I got to travel to Austin, Texas for the Austin International Drag Festival. I’ve been a fan of drag for a long time, but I had noticed in the months preceding the trip that something had changed. After ten years under the radar, RuPaul’s Drag Race had moved into the mainstream (switching to VH1 and garnering several Emmy noms/wins). Suddenly, what was once relegated to the dark corners of gay bars was on TV screens around the world and flooding social media. There were drag tours, cruises, conventions, festivals. All of a sudden, having a full-time career as a drag queen seemed like a viable option.

When I found out about this new festival (where both queens and kings could perform, hone their skills and network) I knew I had to find out who was going. I pitched my editors and then they sent me, along with photographer Matt Nager, to capture the colourful people we met. And they came from all over – Canada, Australia, the UK, Berlin, Hawaii, Alaska.

I don’t think I’ve ever had this much fun on an assignment. And to be nominated for something I so loved doing is such an honour.

You can read the story here.