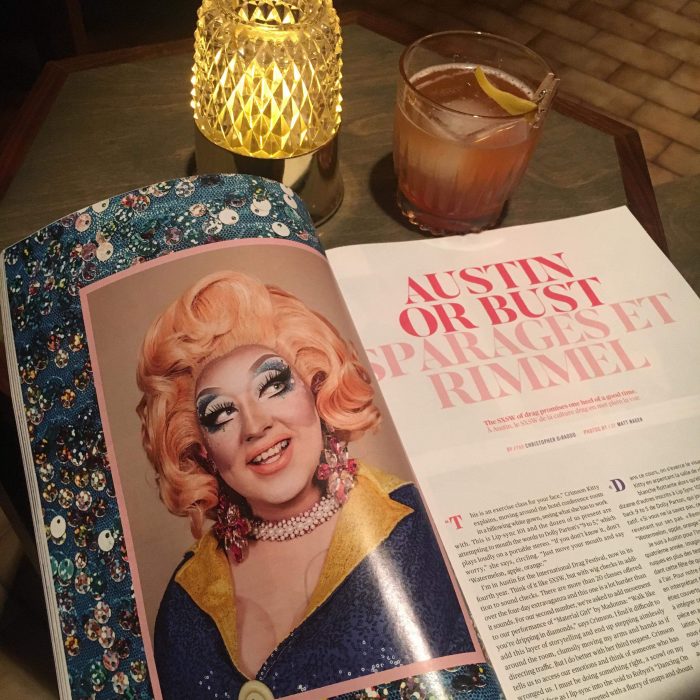 I never feel more like a journalist than when I am on assignment for enRoute magazine. I suppose it’s as close to what I hoped a career in journalism would be: Researching a story, pitching it to an editor, booking a flight and then travelling to a part of the word to bring back the story. Those kinds of gigs are few and far between these days.

But that’s exactly what I did last November. A big fan of drag, I had noticed an emerging trend. As RuPaul’s Drag Race continued to grow in popularity and gain mainstream attention, more and more events were popping up all over the world. Drag queens started touring and conventions were held. Suddenly, drag artists were getting on planes to perform for audiences – and I wanted to see who was travelling.

After doing my research I discovered that Austin had an international drag festival (now in its forth year). It was much different than the main convention I had heard about. Dragcon was a chance for fans to see their favourite reality TV stars up close. But Austin was about elevating the art form and providing a stage for all kinds of artists to perform. Anyone could come to town and take classes. And if you were a drag queen or king known only in your hometown, you could apply to perform in Austin and show what you can do on stage to a large audience of passionate supporters.

I was in disbelief when the story was green lit, but pretty soon I found myself in Austin meeting up at the airport with a photographer we had flown in from Denver. Matt Nager wasn’t too familiar with the drag scene, but he was a skilled portrait artist and we knew the shots we would get with him would make the feature shine. Together we left the airport and headed to a photography supply store where we picked up a large cream backdrop to photograph the queens and kings against. We met a lot of wonderful people.

You can read all about my adventures in the June edition of enRoute here.

Unfortunately, there was not enough room to include all the interviews and all the photos we took, so we created a second feature for the web. You can read that here.

One day, I hope to make it back to Austin for the festival. It was such a fun time and I fell in love with these people. The producers are hard working volunteers who truly love and respect the craft, and the performers we met were all so funny, so talented, so generous. It made me wish that I did drag.