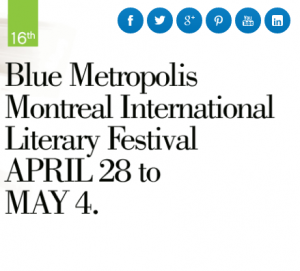 On Wednesday morning I went to the Blue Metropolis press conference. I attended partly for CBC Radio, where I work as an editor for Canada Writes, and partly because I’m a guest writer at this year’s literary festival.

I used to work for Blue Met. For eight years I was their publicist. This was back in the festival’s early days. Back when I was beginning my freelance practice. It was one of my favourite contracts. I loved it because it inspired me. It kept me surrounded by writers: some whom I knew, others who I discovered.

I took many a taxi with literary superstars, chauffeuring them to their interviews. Writers like A.S Byatt, Julian Barnes, Carlos Fuentes and Margaret Atwood. You learn so much by making small talk, going from point A to B. At some point conversation would turn to “So what do you do?” and often times many of them had encouraging words for an aspiring writer like me.

So here I am now, ten years after working for the festival for the first time, attending as an author whose first book is about to come out. I have two events on May 3rd. One is called “Becoming a Writer”, which also features Alix Ohlin, Padma Viswanathan, Zoe Whittal and my good friend Daniel Baylis (more info on my events an be found here). I’m looking forward to it immensely.

CBC TV spoke with me at the press conference about appearing at the festival. You can watch the video below.