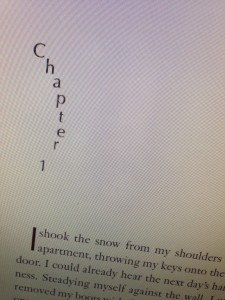 Things are moving quickly. I spent last weekend going over the proofs. The book arrived in PDF form for me to have one last look before it heads off to the printer. It was the first time I saw the text laid out as it will appear in the book.

It was thrilling! I’ve been staring at the manuscript in Word format for so long. I started writing the book in Verdana, then switched to Times New Roman at some point to get a fresh perspective. I don’t know what font it’s in now, but it sure breathes new life into the text. It now looks LIKE A BOOK – dressed up for a night out, ready to have its picture taken.

It was also an incredible feeling to see my name on the title page, to see the credits page complete with ISBN numbers and Library and Archives Canada listing, to see the dedication to my parents, the acknowledgements to my friends, to see my name on every even page, and the flourishes designed to accompany every new chapter.

We caught a bunch of bugs. On a couple of occasions the hyphens turned into fractions. There were also a couple of orphan characters hanging out where they shouldn’t. But one of the biggest errors I caught was that I had given the same last names to two passing characters. Both Will’s retired co-worker and his doctor were called Dalpé! Thank God I caught that in time!

Naming characters has never been easy for me. Will himself had about a dozen. In early drafts he was called Simon, Neil, Manny, etc. None of them sat right with me and I kept changing them over the years until I arrived at what made sense. It was the same with these smaller characters. I’d stroll through my Facebook feed, looking for original names that matched the characters in my head. I guess I had forgot that I had already used one name for the other.